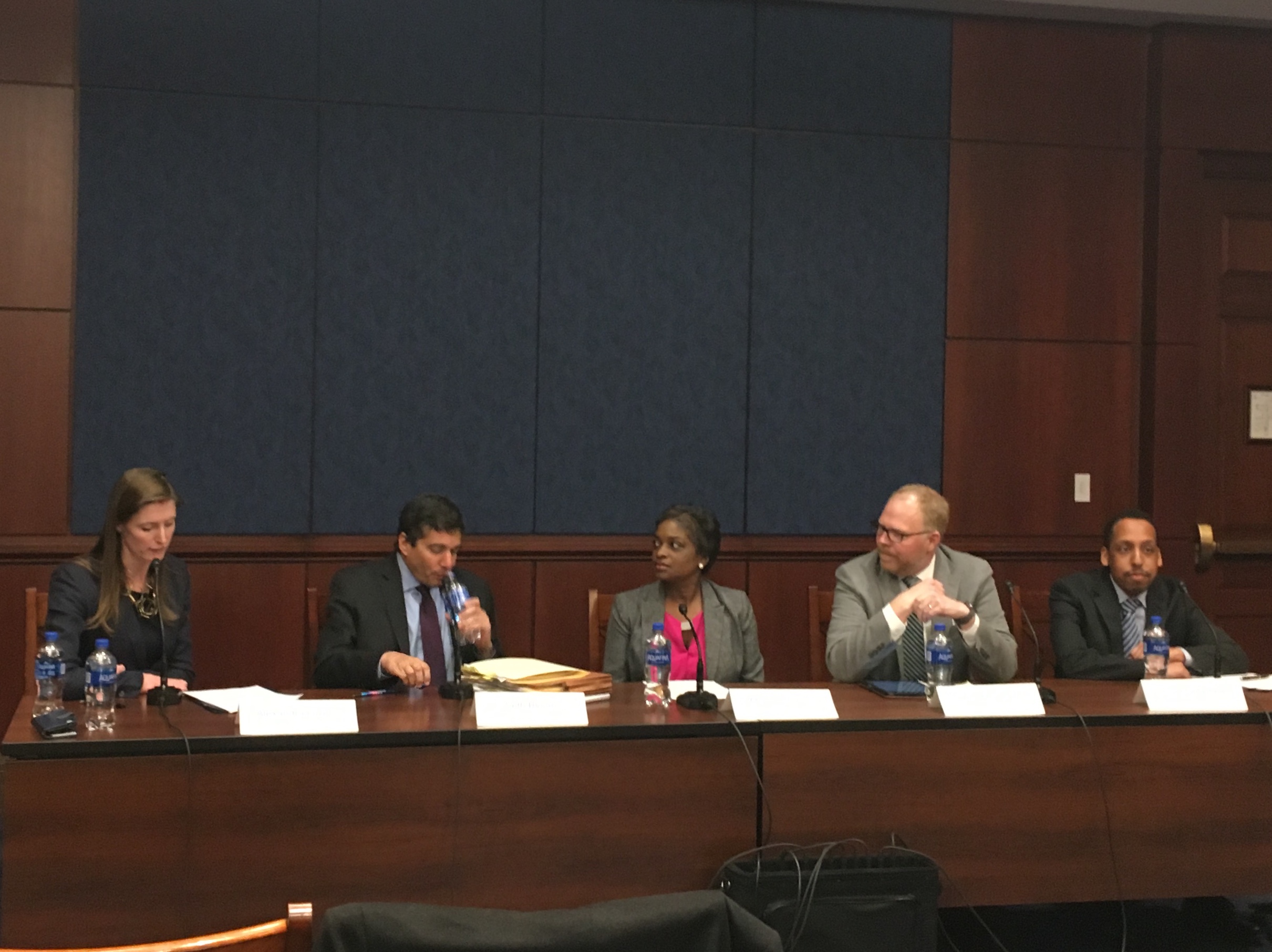 Sprint/T-Mobile Merger Advocates and Opponents Square off on Capitol Hill to Discuss Consumers, Competition & the Future of 5G

While both sides conceded from the beginning that few minds would be changed, supporters and opponents of the proposed merger of T-Mobile and Sprint squared off in a lively debate at the Capitol Visitors Center on March 5, hosted by the Georgetown Law Institute for Technology Law and Policy. The event came on the heels of a hearing into the merger before the House Energy and Commerce Committee on February 13. In addition to surviving Congressional scrutiny, the merger must be approved by both the Federal Communications Commission (FCC) and antitrust division of the Department of Justice (DOJ). The nature of the parties’ positions reflected the differing standards each agency is charged with applying: the FCC’s holistic review into if the merger would serve “the public interest, convenience and necessity,” compared with DOJ’s enforcement of the Clayton Act’s command that any merger which substantially lessens competition is illegal.

David Goodfriend, arguing against the deal on behalf of workers expected to be laid off, opened the debate. He declared that the potential tie up of the third and fourth largest national wireless service providers was presumptively illegal under Section 7 of the Clayton Act because it would reduce the number of competitors in the market for nationwide wireless service from four to three and would increase the Herfindahl-Hirschman Index for that market by more than 200, which under DOJ merger guidelines is a merger that presumptively lessens competition. He noted that in certain submarkets, particularly the pre-paid market (through subsidiary brands Metro by T-Mobile and Boost Mobile), the concentration is even more powerful.  He also took issue with the suite of benefits promised by T-Mobile and Sprint; declaring their promises of pricing freezes to be nonsense as they were either “toothless” agreements or a form of rate regulation—a practice which industry leaders frequently decry as stifling to innovation.

Because the Clayton Act prohibits any merger that substantially lessens competition, without room for balancing, the market definition adopted by regulators tends to be dispositive. Reflecting this reality, Robert McDowell for T-Mobile, took issue with Goodfriend’s market definition. McDowell insisted that market leaders Verizon and AT&T were so far ahead of T-Mobile and Sprint that this merger was necessary to bring the market from two to three competitors. He claimed that this merger was necessary to spur investment in a new Fifth Generation (5G) network at a national scale because Sprint lacks the resources to effectively create a 5G network anywhere outside of the most profitable, concentrated urban areas. He claimed that the combined carrier would result in an explosion of 5G capacity—especially in rural areas—and that this increased capacity would hold prices down.

The issue of capacity holding prices down continued throughout the panel discussion that followed the debate. Opponents Yosef Gettachew, of Common Cause, and Ben Moncrief of C Spire (a regional wireless carrier in the South), challenged the notion that increased capacity would lead to customer savings as opposed to greater shareholder profits, especially in the pre-paid market. Today Sprint and T-Mobile together capture slightly less than 40% of the pre-paid market, competing with each other along-side other smaller brands. If this competition were to stop Gettachew argued that the combined Sprint/T-Mobile would be the single dominant player in this segment, all-but guaranteeing an increase in price. This increase would fall on those least likely to be able to afford it because pre-paid plans do not require a credit check, and thus are used mostly by people with little to no credit history or low incomes.  Merger supporters Seth Bloom, for Sprint, and Former FCC Commissioner Mignon Clyburn for T-Mobile never mounted an effective rebuttal of this economic argument perhaps because, as Moncrief noted, Sprint and T-Mobile’s own economic analysis shows that some price increases are inevitable in the long run. But Bloom reaffirmed that the three year price freeze was an “iron-clad guarantee.” Addressing the impact on low-income communities, Clyburn assured critics that Metro and Boost Mobile (T-Mobile and Sprints pre-paid brands respectively) would continue to operate as independent brands. Though it is not at all clear how simply maintaining both identities would promote competition if decision making is integrated in the merged carrier.

Moncrief also expressed fear that the merger would increase prices for wholesale buyers, including regional carriers like C-Spire, who rely on contracts with national providers to ensure nationwide service for customers when they leave the regional carriers own coverage area. He stated that Sprint is the leading provider of wholesale coverage to regional carriers, while T-Mobile is, in his view, notoriously resistant to such partnerships. He expressed fear that the merged carrier, which will be headed by the present leadership team at T-Mobile, would maintain this antagonistic relationship and even use the increased market power to stifle competition from regional carriers.

Just a few days after this event, on March 7, T-Mobile submitted a 63-page addendum to the FCC detailing T-Mobiles plans for wireless broadband. In order to allow time for public comment on these new filings the Commission paused their 180 day “shot clock” to review the merger at 122 days. The timer restarted on April 4. If the FCC approves the deal, DOJ could still sue to stop the merger.